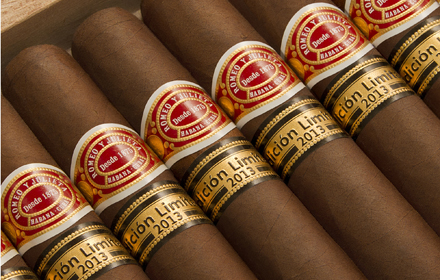 Two new for you

Two new cigars have recently been launched by Habanos s.a and are now widely available across the UK. One is the latest Limited Edition to hit these shores, while the other represents an addition to the standard range of Montecristo, the World’s most popular Cuban cigar house.

After the success of the Punch Serie d’Oro No.2 and the Hoyo de Monterrey Grand Epicure, Romeo y Julieta have released the Romeo de Luxe, the third and final Edicion Limitada of 2013.  As with all other Limited Edition releases (from 2007) all of the tobacco used in these cigars have been specially aged for a minimum of two years and they are all dress with a dark wrapper leaf.

This new release is presented in a varnished box of ten and measures 6⅜” (162mm) x 52 ring gauge. Known as a Capuleto in the cigar factories of Cuba, this is a unique size within the Cuban range.

Meanwhile, Montecristo has introduced its second new cigar of 2013 to their standard range this year. Following hot on the heels of the Edmundo’s big brother (the Double Edmundo, released in October), they have now launched the little brother to, arguably their most iconic cigar, the No.2.

The Montecristo Petit No.2 is presented in labelled boxes of 25 and comes dressed with the newly designed Montecristo cigar band. It also represents a brand new size within the Habanos portfolio, measuring 4 ¾” (120mm) x 52 ring gauge.

To find your nearest stockist of these two new cigars, please visit our “Where to Buy” page  by clicking here and then view your local Specialist.