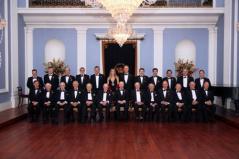 Time is flashing by, but it’s not too late to mark the incredible cigar moment that flew under most radars on November 11 last year.

Imagine a meal so special that it only occurs once a century, and then conjure the sort of menu that might be appropriate to such an occasion, double it with sauce and finish with cigars.

Then throw in the weight of history – not Remembrance Day in the normal sense, I hasten to add – but the remembrance of a different military victory over the French, namely the 200thanniversary of the repossession of the Factory House in 1811 by the British port merchants following the liberation of Oporto, Portugal, by an Anglo-Portuguese army under General Wellesley (later Duke of Wellington).

Exactly one hundred years later in 1911 John Hatt Noble, the then Treasurer of the British Port Shippers Association, held a Centenary lunch with 11 members (actually descendants of the very port shippers who had been present at the re-opening in 1811), sitting down at 11am on 11th November to a lunch of 11 courses with 11 wines.

Yes, you can guess. Another hundred years had to pass for this momentous occasion to happen again. And that great moment occurred just a few weeks ago. So we might be into 2012, but it’s hardly too late to recount an event like this. Another century must pass before it will happen again, God willing, and very probably no one alive now will witness it.

Now what exactly is this preoccupation with the number eleven? Ben Howkins, who has spent much of his career with port until a certain Tokaji came and stole him away, devotes a whole chapter to it in his (much recommended) new book Real Men Drink Port…and Ladies do too! He starts merely by observing that port’s favoured number is eleven, stemming from Freddie Cockburn’s ditty:

This is not enough to hang a historical treatise off, but Howkins tries his best by pointing out that Anne Boleyn had eleven fingers.

Let’s agree merely that 11/11/11 was a coincidence of history and move on to the menu from the latest dinner.

This time around, Treasurer Dominic Symington, grandson of Maurice Symington, hatched another stupendous list of elevenses. Needless to say, it was a feast that hearkens back to the royal courts of mitteleuropa in the time of kings and queens:

It was probably felt that after an eleven course meal some of the guests might only want to gently puff at something rather less demanding than might be expected – indeed, the Montecristo Club is just a machine made whiff and arguably out of place at an event like this. As for the Hoyo de Monterreys, the exact vitola remains elusive, leaving the Short Churchill which are right on the money, and indeed a perfect port cigar, a modern version of the type of thing that would have been smoked on any day in the Factory House over the past few centuries.

Not having been a witness to these proceedings, it is much harder to do justice to the atmosphere and weight of historical occasion than it is to ogle the menu. But we should try, because it represents a different slice of British history, one that was all about the Peninsula Campaign, Napoleon, prohibitions on French wine consumption in England and partly as a consequence, the absolute rise of port as the most popular tipple.

As for the Factory House, it has an amazing library and a ballroom, but the highlight is apparently two dining rooms that are the stuff of legend. You ate in one and drank port and smoked cigars in the other. You still do. Nothing has changed. This is a Good Thing.

One last quirk to try and impart a sense of this Palladian structure, what Howkins refers to as a “magnificent oasis within an oasis,” (he means an ex-patriate oasis, at that). Every single day sees the librarian hang up a perfect copy of the London Times, but for the same day one hundred years ago. Now that really is style.