The third and final 2012 Limited Edition cigar has been released by Habanos SA. The Montecristo 520 is an entirely new size within the Habanos portfolio and has been created to commemorate the 520th anniversary of the arrival of the Habano in Europe following Christopher Columbus’s discovery of Cuba in 1492.

This is the eighth time that the Montecristo brand has been selected to produce a limited edition cigar.

The Montecristo name is in dedication to the Alexandre Dumas’ novel The Count of Montecristo, a popular book when read to the cigar rollers in the factories of Havana. The origins of the name are also reflected in the ‘crossed sword’ motif of the Montecristo badge. The striking name, coupled with the bold design and colours of the logo have surely helped Montecristo to become the most recognisable cigar brands in the entire world.

Montecristo is the world’s biggest selling Cuban cigar brand.  It also boasts the world’s best-selling individual size: the No. 4, which provides the benchmark taste for many smokers of handmade cigars.

Last year Montecristo was once again Britain’s best-selling handmade cigar brand accounting for around a quarter of all the Habanos sold in the UK domestic market.

Montecristo was first made in Havana in the summer of 1935 at the Particulares factory, which had been bought a few years previously by a successful businessman named Alonso Menendez.  Around this time Menendez joined forces with José Manuel ‘Pepé’ Garcia, formerly a senior commercial manager at the Partagas factory, and founded the Menendez y Garcia Company.  Together they decided to make Montecristo an exceptional brand.

Their guiding principle was that Montecristo should be of one quality only – the finest.

There were to be just five sizes, which were to be numbered not named.  Production would be low, and prices high.  It would be sold only in a limited number of the most reputable cigar merchants starting with Alfred Dunhill’s stores in London and New York.

Whilst developing the brand Menendez and Garcia worked closely with the British cigar importers John Hunter, Morris & Elkan Ltd., whose then Managing Director, Jack Benham, is reputed to have created the outstanding design for the Montecristo box.

In 1937 an opportunity arose for Menendez y Garcia to expand.  The H. Upmann factory in Havana, which was owned by another British company, J. Frankau & Co. Ltd, was up for sale.  After tortuous negotiations Alonso Menendez bought H. Upmann from D. G. Freeman, the owner of J. Frankau, for £100,000.

In the same year, production of Montecristo was moved to H. Upmann where it has remained ever since, although the location of the factory has changed twice.

By coincidence the two British companies, which played separate parts in the birth of Montecristo, are now one: Hunters & Frankau.  The Freeman family is still closely involved in the business.  Today Jemma Freeman, D. G. Freeman’s great granddaughter, is the company’s Managing Director. 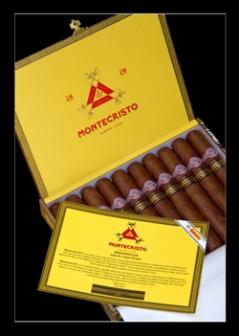