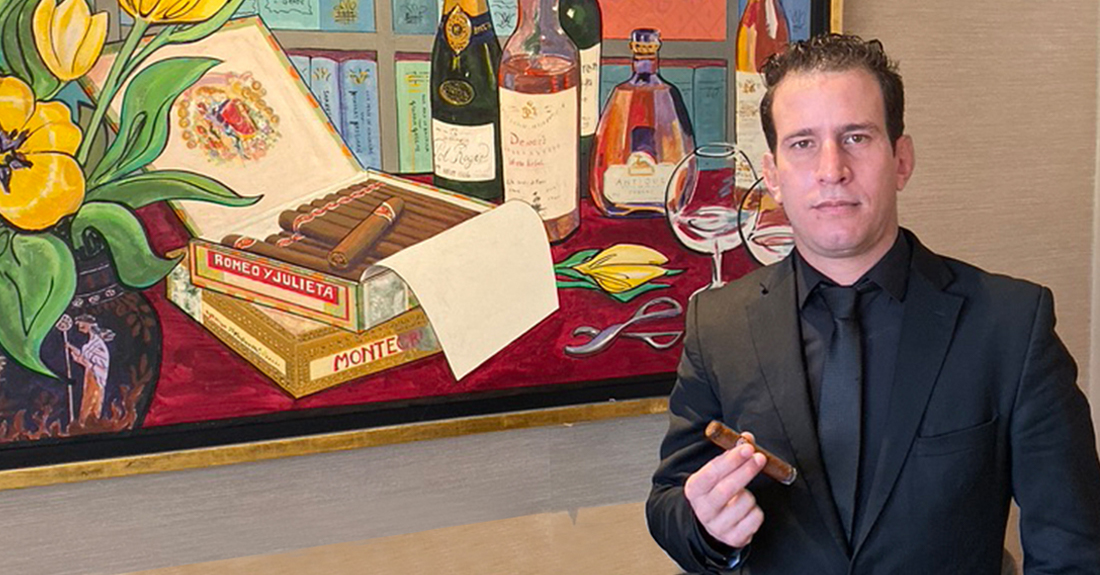 Jose Antonio arrived on 2nd December 2019 to begin his new role in the U.K, replacing the outgoing Yadira Bulnes Lopez, who has returned to Cuba having fulfilled her four-year term, to take up a position within Habanos S.A.

Jose Antonio is a qualified lawyer who has over twelve years’ experience in the cigar industry, prior to his arrival in the UK. This includes three years as Deputy Director at the world-famous El Laguito factory, the home of Cohiba.

Before sitting down with him to ask a few questions, Hunters & Frankau’s Head of Communications, Jimmy McGhee, said “I have known Jose for some time,  from my visits to Havana, and think it is a great boon for the U.K that we have someone with his experience here with us. I’m excited to work with him and have no doubt he will add a great deal to our market.”

How did you initially become involved in the cigar business in Cuba?

After graduating from the University of Havana, where I studied Law, I worked as a prosecutor. My first contact with the cigar industry was at Lazaro Pena, a highly specialised company involved in wrapper leaf production.

So initially, I was introduced to the cigar business through the agriculture side.

How long have you worked in the industry?

What was your role in Havana before coming to the UK?

Before my role as Corporate Director at Hunters & Frankau, my last management role was Deputy Director of the El Laguito factory (the home factory for Cohiba) which represented such a great honour and challenge for me. Before that, I had spent some time in a similar role at the Romeo y Julieta factory. I also spent a one-year-training period inside Habanos S.A. in order to become more involved with commercial and marketing aspects of the cigars business, just before I came to the UK.

What are your main responsibilities as Hunters & Frankau’s Corporate Director?

First of all, I am the Habanos S.A. representative in the UK market, which means that I will act as a link between the U.K and Cuba, to ensure clear lines of communication and to understand the peculiarities of the UK market when viewed alongside Habanos S.A’s global strategy.

Of course, I have other more specific responsibilities, but let’s not get tied up in too many details.

What do you think of the UK cigar market now you’ve been here for 7 weeks?

As a mature, high-value market, the U.K is very important the Cuban cigars business in many respects. I spent a month with H&F in the UK last year, which was extremely useful preparation for me.  One thing I realised immediately is that the UK market is a complex one, with many different aspects to it.

It is always a challenge to be involved in this business due to the regulations and the legal environment that the UK has had to deal with during all these years isn’t always easy. However, in the UK, I have found that there is a high level of knowledge and many highly trained people amongst the retailers and consumers as well. It is an exciting market to be a part of, that’s for sure.

What are your three favourite cigars?

Number one is Cohiba Lanceros – which will always be my favourite. I’ve had the opportunity to spend time with and be a friend of the creator of the Cohiba Lanceros, Eduardo Rivera. I started with him and Pedro Luis Perez Acosta, the current General Director of El Laguito factory to really appreciate the true essence of this wonderful size.

Of course, over the years I’ve been lucky enough to taste many different brands and vitolas but there is still nothing like the Romeo and Julieta Churchill, for me. It is a very serious cigar but also one that is bursting with personality.

My third cigar would be Ramon Allones Specially Selected, because of the brand. This is due to in the early stages of my career I studied Ramon Allones brand very closely and I love the Robusto size, which is a very known and popular size all over the world nowadays.

How are you enjoying the British weather?

Not at all! (laughs)…  No, seriously, the weather here is so different here than in Cuba that it’s difficult to make a serious comparison. So far I am enjoying it as it is a new experience because we don’t have weather like this in Cuba.  I think I will adapt to this new weather in a few months without any issues.

We are sure you will join us in welcoming Jose Antonio to the U.K and wishing him well during his time here.