How the embargo began by Pierre Salinger

With Obama-inspired speculation mounting about a possible end to the Cuban-American Trade Embargo, it is interesting to hear from a man who was present forty-seven years ago when it was first signed.

Back then the late Pierre Salinger was press secretary to President John F (Jack) Kennedy. One morning in February 1962 he was chosen for a special presidential mission, which soon entered cigar lore.

This interview was filmed on Friday 3rd May 1991. I know because I was there. It took place in the back room of Wilton’s restaurant in London’s Jermyn Street at a lunch H&F organised for a German TV documentary about Cuban cigars.

Edward Sahakian of the Davidoff Shop arranged, through a contact, for Salinger to attend. I invited Lord ‘Lew’ Grade, who accepted like a shot.

Also present, as you will see, was H&F’s late Chairman, Nicholas Freeman, along with our present Chairman, David Lewis – if you know him, you’ll recognise his off-camera laugh.

I remember we nearly blew it. It was decided there should be no filming until after we’d eaten and the cigars were served. During lunch Pierre had regaled us with all his great cigars stories. Would he tell them again for the camera? Thankfully he did, and brilliantly too.

One thing had always puzzled me about Kennedy’s cigars. It was said that he smoked a tiny size called Petit Upmann; an odd choice for the world’s most powerful man, who came from such a wealthy background too. Pierre confirmed that was exactly what he liked as you will see from the ‘60s footage in the clip.

You can still find Petit Upmann today, although it’s now called H. Upmann Coronas Junior. At £5.60 it’s one of the least expensive Habanos you can buy. 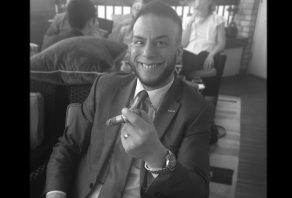