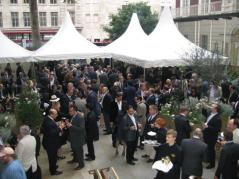 Hunters & Frankau would like to thank everyone who attended our annual Summer Cigar Party on Thursday 23rd June at The Langham Hotel. It is with some relief that we say UK cigar enthusiasts are now finally able to enjoy the much anticipated 2010 Regional Edition, La Flor de Cano Short Robusto.

The venue was superb, the weather held out and the cigars lived up to expectations. On arrival guests received a gift bag containing two of the new cigars and two Por Larrañaga Regalias de Londres the other (more punctual) Regional Edition from 2010, a cutter and some cigar matches. There was also a slip of paper explaining that, despite H&F’s best efforts, the expected Partagás Serie E No.2 had not arrived on time for the evening. It also went on to explain the different ways in which guests could receive these cigars when they finally arrive in the UK.

A five-piece Cuban band brought some Caribbean warmth to proceedings while Señor Yoel Ulacia Diaz from Havana’s Partagás factory demonstrated the art of the Torcedor (cigar roller). Pol Roger Champagne (Vintage 2000), Hine Cognac and a Hine based cocktail ‘The Horse’s Neck’ flowed freely throughout the evening, along with a selection canapés, Fine Habanos and even a choice of Cuban Minis.

Over 150 guests from around the world attended including journalists, specialist retailers and aficionados. Sean Croley (Hunters & Frankau General Manager of Sales & Marketing) welcomed the guests then handed over to Simon Chase who explained the history of La Flor de Cano brand and introduced the new cigar to the audience.