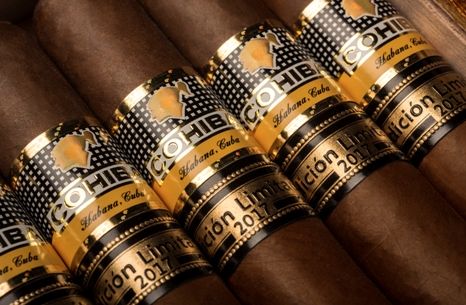 The Cohiba Talismán was launched globally at the Corinthia hotel in London on Tuesday 7th November and is now available to buy across the UK.

The latest stunning Limited Edition from Cohiba has been the most eagerly anticipated cigar in years for many people and follows the phenomenal success of Cohiba’s previous Limited Editions, including the 2004 Sublimes, the 2011 1966 and the most recent, Robusto Supremos from 2014.

Expectations have been building ever since the Talisman was first announced at the annual Habanos Festival in Havana earlier in the year and now the cigar is finally here and available to purchase.

The Talismán is classified as Medium to Full (using the Linea Clásica blend) but has a deceptively light touch, delivering a rich and nuanced smoke of exceptional balance without ever overwhelming the smoker.

Although young, these cigars are already being talked about as a classic by those lucky enough to have tasted them. The Talismán is a first class example of a modern Habanos and one that everyone seems to agree will improve and appreciate in value in the years ahead.

All the tobaccos used in a Limited Edition cigar are aged for at least two years. However, in addition to this the Seco and Ligero leaf in Cohiba cigars undergo an ‘extra fermentation’. This may last as long as eighteen months and is conducted at the factory in cedar barrels. Cohibas are the only Cuban cigars to undergo this process and it provides all of their cigars with a unique smoothness. The maduro wrapper leaf that has been used to dress this cigar provides just a touch of sweetness that plays across the top of the palate.

The name Talisman draws inspiration from Cohibas indivisible links to the ancient Taino Indians, the original inhabitants of Cuba, who smoked their sacred tobacco leaves as part of a mystic ritual, overseen by the tribe’s Behike.