You may think that the Cigar Dinner is something from the history books but I can assure you that the tradition is alive and kicking in the cosy and stylish surroundings of the Montague hotel’s Cigar Terrace which overlooks beautiful green oasis of the Bedford Gardens.

The Montague in the heart of Bloomsbury has a two terraces and I was delighted to see that tonight the main cigar terrace is wrapped up against the cold with the heaters on full with an affable group of London’s cigar lovers gathered for a sumptuous cigar dinner.

The evening starts at 6.30 with some very tasty Canapés, a beautifully chilled glass of Joseph Perrier Brut champagne matched perfectly with a 1998 Sancho Panza Non-Plus cigar. This is a light aged cigar which was subtle and not overpowered by the light, vivacious champagne. Thoroughly refreshed we were introduced to the first of the evening’s whiskies. 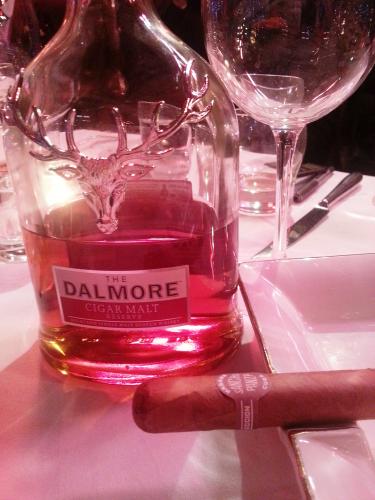 It’s not my usual habit to imbibe whisky at this stage of a meal but maybe it was the warmth of the terrace or possibly the excellent company that drew me in. Whyte & Mackay’s Premium Brands Manager Anthony Parker was on hand to introduce the first of three of his finest each matched to the cigars we were smoking.

The Dalmore Cigar Malt Reserve is a relatively new addition to the range and has been aged in three types of casks: American white oak ex-bourbon casks, 30 year old Matusalem oloroso sherry butts and premier cru Cabernet Sauvignon wine barriques. It was light and smooth and again didn’t overpower a lighter cigar.

We then moved onto dinner at the tables set up on the terrace, the beauty being that you can continue to enjoy your cigar without interruption. The starter was a foie gras and confit duck terrine with red onion marmalade accompanied by a   2011, Coteaux du Languedoc white from the Montague’s excellent cellars which was introduced by the Tibor Gal the hotels charming wine and cigar waiter

This was followed by a fish course of Pan-fried scallops with pancetta and pineapple salsa accompanied by a fruity 2011 Viognier, ‘De Gras’, 2011, from the Colchagua Valley. 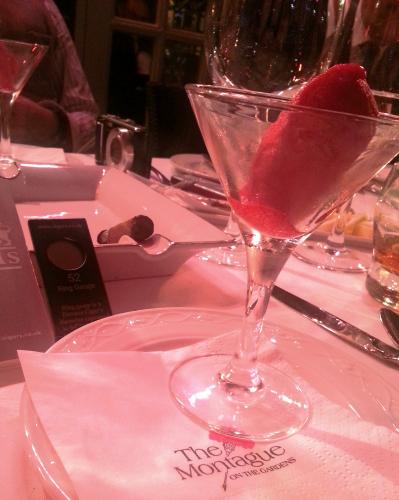 We paused momentarily for a Raspberry sorbet palate cleanser before the second cigar was introduced by Jimmy McGhee from Hunters and Frankau, who was our cigar host for the evening. What I hadn’t realised until this point was that this was Jimmy’s own personal selection of cigars. Considering he has the pick of the whole of the importers not inconsiderable store it is clear that he thoroughly enjoys his work. His selection ranged over three cigars which many people may rarely if ever have smoked and introduced us to one of this year’s latest releases.

The cigar was a Romeo y Julieta Escudos Limited Edition 2007, a cigar with the characteristic dark wrapper which might even be described as a Maduro.

After a short break we moved on to the main course, a perfectly cooked Fillet of beef  with baby vegetables, truffle and Madeira sauce accompanied by a stylish 2008 Sangiovese, Pinot Noir, Nebbiolo.

As we enjoyed our wine and the cigar Anthony introduced the second whisky of the evening The Dalmore 18 which has been matured, initially for 14 years in American white oak ex-bourbon casks, after which the whisky is transferred to 30 year old Matusalem oloroso sherry wood for a further four years. A more intense whisky it complemented the more flavoursome Romeo y Julieta cigar perfectly. 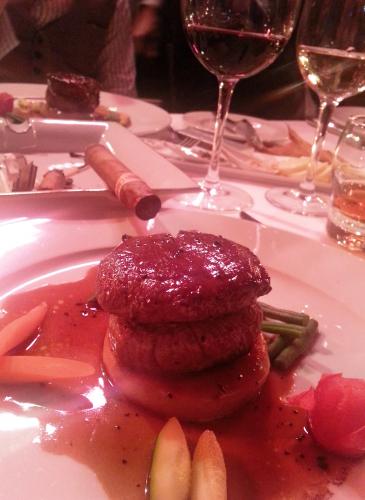 As we completed our second cigar the cheese course was served, a Somerset brie stuffed with Morel mushrooms which was accompanied by a 2010 Malbec, from the Salta Valley.

The Petit Belicoso is a punchy little cigar ideally suited for the relaxing after an excellent meal. It combined beautifully with the whisky; crafted to honour the act of saving Scotland’s King in 1263. The amazing complexity of its flavours stem from a combination of six different casks used to develop the spirit during its maturing. A fitting high point for a wonderful evening.

I’ve just done a quick ‘back of the cigar box’ calculation of the cigars and fine drinks we all so enjoyed; and while many people might look on this as an luxurious evening because of the headline investment,  I have calculated that based on what we smoked and drank we effectively enjoyed an the excellent dinner and coffee for free.

While I took my train journey and cab ride home I made a mental note to book a room at the Montague for the next cigar evening.

Leaving the excellent and convivial company and a half bottle of the beautifully complex King Alexander III whisky was almost criminal. Next time I intend to get there early and stay very very VERY late.