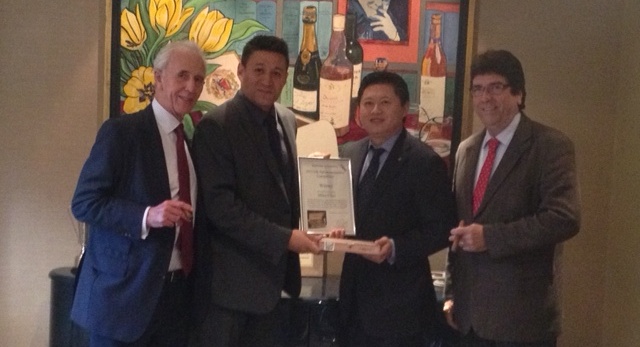 The annual UK HabanoSommelier final was held at Hunters & Frankau’s London head offices on Tuesday 29th October. Six finalists from some of the leading cigar friendly restaurants, hotels and clubs, with outdoor cigar areas, arrived to face a tough day of competition.

The prize at stake was an all expenses paid trip to Cuba to represent the UK at the International Habanosommelier final during the annual Cigar Festival in Havana.

His strong written exam coupled with impressive depth knowledge of Cuban cigars and exemplary cigar service carried the day. Mike said of his victory “There were a lot of knowledgeable guys here so to come out on top is great. I hope to do the UK proud”.

They were then set a role play designed to assess their knowledge of Habanos cigars, their ability to recommend the correct cigars for specific occasions and their skill in cutting, lighting and serving the cigars that they had recommended. The scenario the competitors faced was:

A husband and wife have just finished a dinner to celebrate his retirement and have now moved outside to the restaurant’s COSA (Comfortable Outdoor Smoking Area) to enjoy a cigar.

They have around an hour before they must leave for a concert. The wife would also like to purchase an additional cigar to enjoy during the 20 minute interval at the theatre. She prefers medium flavoured Habanos whilst her husband likes full flavoured cigars.

Please introduce all the cigars that you find in the Humidor to the couple, and make a recommendation of the right cigar/s for each smoker.

The contestants were presented with a humidor containing eight different cigars and asked introduce each cigar then make the correct recommendation for each specification. The cigars they had to choose from were:

In February of this year the UK candidate for the competition, Peter Dobrontei, finished a very respectable third. Everyone at Hunters & Frankau wishes Mike the best of luck in his attempt to go one better (or two) next year and bring the trophy back to the UK.