Warning: {{image.url}} is deprecated and will be removed in 1.1; use {{image.src}} in /home/cigars40/public_html/wp-content/plugins/timber-library/lib/Helper.php on line 211 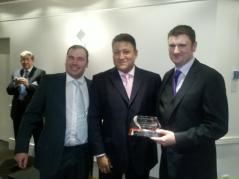 Hunters & Frankau has awarded the Silver Chaveta for Habanos Retailer of the Year 2012 to Chis and Andrew Corrieri  of Brucciani’s and Cuban Cigar Club in recognition of their outstanding contribution to the UK fine cigar trade.

This award reflects the passion and commitment that Andrew and Chris displayed in successfully opening the Cuban Cigar Club in Newcastle city centre as well as their long standing family concern, Brucciani’s .

Chris and Andrew will attend the Habanos Festival in Havana at the end of February in 2013 as a guest of Hunters & Frankau.