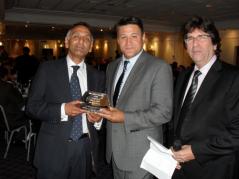 Hunters & Frankau has awarded the Silver Chaveta for Habanos Retailer of the Year 2011 to Paresh Patel of Havana House in recognition of his outstanding contribution to the UK fine cigar trade.

Paresh started working with Cuban cigars 23 years ago in 1988, when he opened his first shop in Cheltenham. Although at that time only a few Habanos were offered for sale to customers, nestled amongst the loose tobacco, smoking accessories and other “bread and butter” items essential for a small tobacconist to survive.

With the support of his family, the business grew, but it was the advent of the internet which allowed his shop and services to reach a whole new customer base which resulted in the demand for Habanos increasing. This demand led to a much wider range of cigars being stocked and eventually a walk-in humidor being built. However, his first trip to Havana in 1999 sparked a flame and within a year of his return, he opened a Gold awarded Specialist cigar shop in Windsor called Havana House with his then partner. Today it still thrives selling fine cigars and smoking accessories to the illustrious inhabitants and visitors alike.

After the smoking ban in 2007 Paresh was one of the most proactive people at promoting smoking events outdoors – particularly ones held on water. His Cuban cigar cruises on the river in Windsor are legendary and tickets usually sell out within days for this annual event.

In 2010 he acquired another Cigar Specialist shop, “The Bear Shop” in Cardiff expanding his retail operation and has continued to provide a blend of passionate, informed and personalised service that is already proving to be as much of a success in Wales as it has been in Windsor.

Paresh will attend the Habanos Festival in Havana at the end of February in 2012 as a guest of Hunters & Frankau.