The annual UK HabanoSommelier final was held at Hunters & Frankau’s London head offices on Tuesday 18th October. Three finalists from some of the leading cigar friendly restaurants, hotels and clubs, with outdoor cigar areas, arrived to face a tough day of competition.

The prize at stake was an all expenses paid trip to Cuba to represent the UK at the International HabanoSommelier final during the annual Cigar Festival (February 26th to March 4th 2012) in Havana. 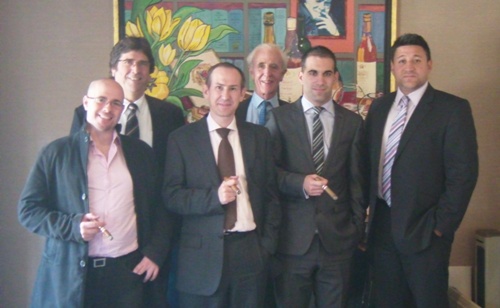 Although it was a very strong field and each competitor had individual merits, at the end of a tough day’s assessment the judges, Hunters & Frankau’s Sean Croley (General Manager for Sales & Marketing), Simon Chase (former Marketing Director of H&F) and Ignacio Balmaseda (H&F’s Cuban Corporate Director), came to a unanimous decision to award Olivier Marie (Coq d’Argent) with the coveted title. His strong written exam coupled with impressive depth knowledge of Cuban cigars and exemplary cigar service carried the day.

41 year old Frenchman Olivier Marie has been with the Coq d’Argent for ten years and is now Head Sommelier and Wine Buyer for the company. He said he was “ecstatic” about his win and was now “determined to make the UK proud in the final”.

They were then set a role play designed to assess their knowledge of Habanos cigars, their ability to recommend the correct cigars for specific occasions and their skill in cutting, lighting and serving the cigars that they had recommended.

The scenario the competitors faced was:

“A husband and wife have just finished their lunch to celebrate their 10th wedding anniversary and would now like to move outside to the restaurant’s COSA (Comfortable Outdoor Smoking Area) to enjoy a cigar.

They have around 40 minutes before they must leave to catch the start of the rugby World Cup Final.

The husband would also like to purchase an additional cigar to enjoy after the game. He has asked for a 20 minute smoke.

The contestants were presented with a humidor containing eight different cigars and asked introduce each cigar then make the correct recommendation for each specification.

The cigars they had to choose from were:

Olivier said of his victory ‘I was quite nervous, but managed to enjoy myself which I think made a difference.’ He then added, ‘Cuba is a country I have always wanted to go to and I’m sure it will be a great week. Now I need to start studying even harder.’

Everyone at the Cigar Smokers Club wishes him the best of luck in his attempt to bring the trophy back to the UK.